The Beats Studio Buds Review: What A Convenience 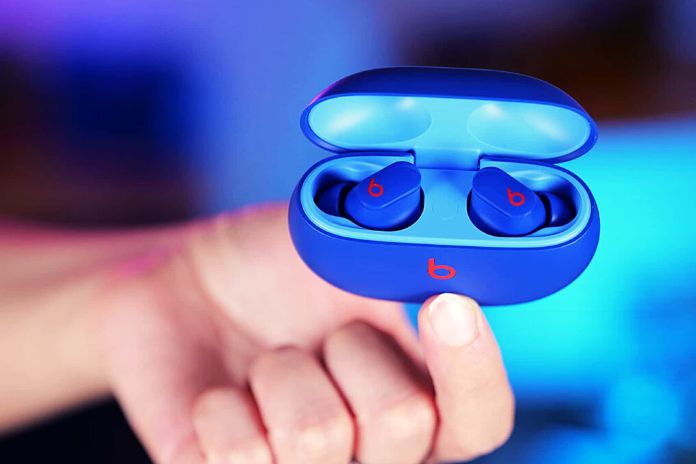 One year of Beats Studio Buds. A year of successes, appreciation, and stellar sales. And so the American company, owned by Apple for some time, has decided to celebrate this anniversary by offering 3 new colors: Sunset Pink, Ocean Blue, and Lunar Gray. What better opportunity than to try them out and tell you how we found ourselves with these true wireless headphones?

Comfort First Of All

Once taken out of the case and inserted into your ears, you will immediately notice that the Beats Studio Buds are very comfortable. Not only because they weigh tiny (5 grams each) but because the design has been well thought out. This allows you to wear them even for several hours without problems, barely noticing their presence. But we appreciated two other elements on the design front: the resistance to splashes and the controls. We have IPX4 certification and a physical button that allows you to control calls and playback.

The choice of the Apple subsidiary is undoubtedly unusual but appreciable in reality: the button allows you to have more precise control than the touch but watch out for beds and sofas. In fact, unlike touch, which responds to human touch, the button can also be pressed by armrests and cushions, so be careful how you position your head if you happen to listen to music, podcasts, or audiobooks while lying down. That said, we appreciated the physical button. The controls are then quite simple:

There is also a long press, the only command you can customize. In fact, by default, it is associated with active noise cancellation. It allows you to activate, deactivate, or switch to Transparency Mode, but nothing prevents you from associating this gesture with a possible voice assistant. By the way, know that on iOS, the Beats Studio Buds respond to the command “Hey Siri. ” Finally, we would like to point out the absence of proximity sensors. This means that by removing the headphones, playback will not automatically pause. You will have to do it manually.

Beats Studio Buds Review: How Do They Behave?

Beats products have accustomed us to important bass, and the Studio Buds are no exception. However, this does not mean that he is unbalanced. On the contrary, we found it balanced, with a particular and inevitable preference for bass but the ability to better separate voices and sounds. In short, the yield has convinced us. You can also count on Spatial Audio, which lets you understand where the individual sounds are coming from. A plus that these headphones inherit from their direct cousins the AirPods Pro.

Connectivity was also promoted with flying colors, with Bluetooth 5.2, which keeps the connection stable even a few meters away from the smartphone. In addition, you can rely on quick pairing on Android and iOS with your smartphones that will automatically recognize the headphones as soon as you open the case. Instead, there is no possibility to connect these earphones to multiple devices simultaneously, so you will have to manually switch from one device to another according to your needs.

What about noise cancellation? Well, the Beats Studio Buds aren’t particularly surprising here. Undoubtedly they attenuate external noises, but we are far from what Sony or Apple itself offers. We were not wholly convinced even of the Transparency Mode, which should amplify external noises, but in reality, the result is not what we expected. We end with microphones that allow you to manage calls without too much difficulty. The overall performance is not the best in the category, with the voice becoming slightly artificial when the earphones have to isolate the background noise. Still, overall we had no difficulty making ourselves understood by our interlocutor.

The software also deserves a small mention. Usually, we would tell you that there is an app to download, but that’s not exactly the case. Or rather, it is so on Android but not on iOS. In fact, the controls are integrated into the system on the iPhone, iPad, and Mac, just like the AirPods. On Android, you will have to download the Beats app, which allows you to manage the same settings that you find on iOS. Then you can activate or deactivate the ANC and Transparency Mode and change the controls related to the long press of the key.

We conclude with the battery that guarantees 8 hours without ANC and about 5 hours with ANC. The case, oval and with a USB-C connector on the bottom, offers you two charging cycles giving you another 10 or 16 hours of battery life. We also point out the support for fast charging, called Fast Fuel, which allows you to have an hour of playback with only 5 minutes of charging.

The Beats Studio Buds are available for € 149. Are they worth buying? In our opinion, they are a well-built product, perfect for those who use headphones for hours and suitable for listening to music, podcasts, and audiobooks. Too bad for the ANC, as you can find something with a better performing noise cancellation by spending more or less the exact amount.