HomeGamingWill Carrom Ever Be Added To The Olympics? Find Out Here
Gaming 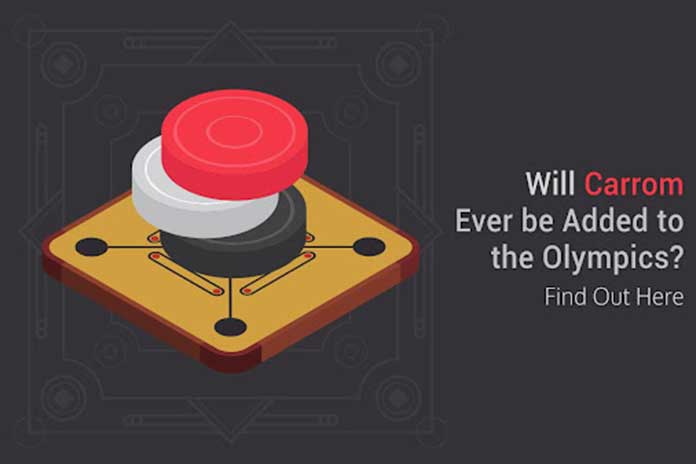 Carrom is an extremely popular and widely-recognized tabletop game that is played by millions of individuals all across the globe. There are numerous similarities between pool and carrom. However, unlike the popular cue sports variant, carrom games feature discs and a striker instead of balls featuring different numbers and patterns and a cue. The primary objective of players in any carrom game is to pocket discs of similar colors and cover them by pocketing the red-colored disc, also known as the queen. According to Precise Sports, carrom is immensely popular as an indoor board game thanks to its portability and compactness. The Indian masses love carrom, and to ensure fans of the game do not miss out on entertainment, tons of tournaments are held in different parts of the country.

Online variants of carrom allow carrom enthusiasts to have a realistic and immersive experience of the top-tier tabletop game. Hence, the popularity of carrom is not only restricted to the orthodox offline mode. Thanks to the game’s demand, tons of top-tier online carrom games are available. Hence, individuals who wish to indulge in online carrom matches can choose a top-tier carrom game app, download and install it on their smartphone, and get started. The most attractive feature of online carrom games is that individuals can play online carrom with their friends or family members or even against anonymous skilled opponents.

Even though the offline mode of carrom is prevalent among the Indian public, the game is not very well-known in other countries. This is one of the primary reasons why carrom is not included or featured as a separate event in the prestigious Olympic games. Besides this, there are multiple other reasons why the game does not have a spot at the Olympics. This article will highlight why carrom is not featured as an event in the Olympic games and whether the popular table top game has any chance of being included as an event in the Olympics anytime soon. Let us jump right into it:

Why Do the Olympic Games Not Feature Carrom as an Event?

Besides having little or no recognition in many countries around the globe, there is another reason why carrom is not regarded as important enough to be included as a separate event in the Olympic games. The Olympics does not feature games or sports forms that do not involve much physical activity. For instance, all the major sports events that are a part of the Olympics include diving, fencing, shooting, etc. All these events require athletes or participants to showcase or indulge in some form of physical activity. For example, archers are required to shoot arrows by moving their arms and adjusting their stance.

Similarly, swimmers need to jump into the water and race against other competitors to emerge victorious in swimming-based events. However, carrom does not involve any significant physical activity. All carrom players need to do to win a match is use the striker to pot discs into pockets. Hence, since the tabletop board game does not require much physical activity, it is not included as a sports event in the Olympics.

Will Carrom Ever Be Included as a Sports Event in the Olympics?

Currently, carrom is not a part of the Olympic event. However, there is a very high possibility of the popular game being included in the Asian Games or Commonwealth events in the near future. However, there are specific requirements to add the tabletop game to major events. For instance, it is imperative that the International Federation takes notice of the game’s potential and acknowledges it. If this happens, the game may be included as a separate event in the Olympics.

Doing so will ensure that the game’s popularity grows among the masses and interested individuals come forward to participate in events. However, if no one shows interest in the sport even after it is added to the event roster of the Olympics, the possibility of the event getting removed from major events increases.

Another crucial factor that may facilitate gaining the attention of event organizers and the governing body of the Olympic games is the positive marketing of the game and its potential. For example, carrom is mainly depicted as a game that requires less physical abilities and more mental skills. However, if the game were to be popularized as a sport that requires more emphasis on physical force and skills like other board-based games, including pool or snooker, it could positively impact the minds of the masses. Furthermore, it could also lead to the rise of professional carrom players from different parts of the world and make them participate in official carrom tournaments.

Even though carrom has received its share of love from the Indian audience, it has yet to impact the international stage. However, India has already started making moves to lure more people into attending carrom leagues and competitions to ensure that the game can get included as a sporting event in major international events like the Asian Games, the Commonwealth Games, etc., and most importantly, the Olympics. Once carrom events get viewership like other major sports forms, chances of the game getting included in the above events will significantly increase.

The hype for carrom has been building up for quite some time now; thus, the possibility of the game becoming a part of the Olympics is not too far-fetched.

Streaming Games: The Trends Of 2022