HomeGADGETSLenovo Yoga Slim 7: The 14" Laptop With A Breathtaking Performance
GADGETS

Lenovo Yoga Slim 7: The 14″ Laptop With A Breathtaking Performance 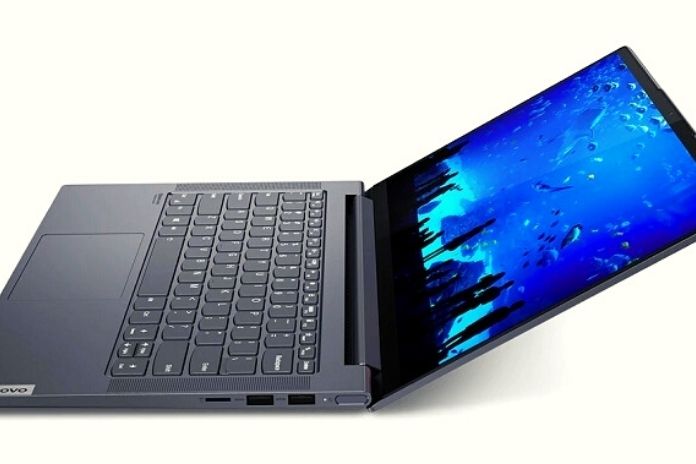 The Lenovo Yoga Slim 7 is a non-convertible, non-touchscreen laptop in the classic format, which is not free from minor flaws but combines two essential characteristics. In addition to good performance in its price range, it excels in terms of autonomy, taking first place ahead of all the PC models we tested in 2020. When we think of Lenovo Yoga, the brand often evokes laptops with 360-degree hinges, convertible 2-in-1 machines that allow the PC to be used as a tablet and a traditional PC.

But Yoga is also a “Slim” range with traditional format laptops. Lenovo offered us to test the Yoga Slim 7, which belongs to this category, a format that many still appreciate. It is equipped with AMD processors like many competitors, such as Huawei. It does not hesitate to use the same model by putting the two processor manufacturers, Intel and AMD, into the competition. How has Lenovo been able to stand out in the jungle of shelf models?

Not in appearance anyway. Upon unpacking, nothing out of the ordinary except for a pleasant slate gray color (there is also an Orchid color). The power supply is also quite classic with two parts with a length of 2.80m which connects via USB-C. The Lenovo and Yoga brands are engraved on the cover side rather discreetly. Underneath the machine is a large rubber pad at the rear end and two smaller ones at the front. They raise the device so that the large ventilation grille can circulate the air to cool the processor. On the left edge, two USB-C ports connect the power supply and another peripheral.

Both are Power Delivery compatible, the second Display Port. The HDMI socket will be used to connect an external screen while leaving the USB-C ports available. On the other hand, it is just as comfortable. Next to the power button are two USB ports in format A version USB 3.1 Gen 2 and a MicroSD card reader. Despite all this connectivity, the computer remains relatively thin, 1.49 cm and keeps a reasonable weight of 1.4 kg, allowing it to be qualified as ultraportable. At the opening, we discover a very well-arranged keyboard. The keys are well spaced for pleasant typing despite speaker outputs on either side.

On the other hand, the trackpad is smaller than those seen in most competitors and would have benefited from being, if not higher, a little wider. Even if it is a laptop in the traditional format, we still try to push the hinge to its limits. Our Yoga is one of the few to allow a 180-degree opening. However, this will not often be of much use since the screen is not touch-sensitive. The lack of touch is not a problem in the case of a non-convertible PC. The 14-inch screen is in 16:9 format, which made it possible to integrate a very comfortable keyboard and forced Lenovo to cut back on the trackpad.

This screen format should appeal primarily to those who watch videos or use software that needs space, unlike other models that favor the 3:2 aspect ratio for working on high pages. On the technical side, we are in the presence of an IPS panel with a definition of 1920 x 1080 pixels and a brightness of 300 nits. This barely compensates for the reflections created by the glossy screen in a bright environment such as outdoors in good weather, a questionable choice when the screen is not touch-sensitive.

The screen’s frame is thin except for a protrusion to integrate the camera. However, this is very useful. Lenovo has indeed not overlooked a modern authentication system. The Yoga Slim 7 does not use a fingerprint reader but facial recognition. Associated with Windows Hello, the security system of Windows 10, the IR webcam does its job very well and unlocks the computer in the blink of an eye both at startup and when it comes out of standby.

So far, everything was going pretty well, but after starting the system, we discovered the presence of additional software. If that of Alexa may seem anecdotal, since the software never launches itself, it is very different from the McAfee antivirus, which welcomes us with a popup advertisement. The Lenovo Vantage software has real utility since it will allow you to monitor the system and perform driver updates retrieved directly from the manufacturer.

Lenovo is not the only manufacturer to integrate a commercial antivirus despite the existence of Windows Defender, which is unrestricted, incorporated by default by Microsoft, and sufficiently compelling. What bothers us is not this choice if it remains discreet, but during our test, the antivirus will present us with no less than 4 different popup windows to push us to checkout. And these are sometimes messages bordering on good faith, implying that we are taking a risk by not agreeing to extend protection. This is false since Windows Defender automatically takes over in the event of default antivirus, but this could mislead the less informed.

Performance At The Rendezvous, Bluffing Autonomy

Suddenly, this Yoga Slim seems much less sympathetic to us. It is to be hoped that the rest will be up to par. The configuration is rather attractive with an AMD Ryzen 5 4500U processor supported by AMD’s graphics solution, 8GB of RAM and a 256GB SSD. Nothing extravagant, however, nor in the rest of the specifications since the PC does not offer the Wifi 6 in this version (but the version equipped with a Ryzen 7, yes). It holds its rank well at the benchmark level. Novabench gives it a score close to 1900 points, not far from an XPS 13 equipped with a Core i5 and a little below Microsoft’s Laptop 3 in Core i7.

On the Geekbench site, the single-core test shows 1066 points and 4922 in multi-core. The GPU meanwhile reached 10787 points. This makes it possible to envisage very comfortable use of demanding applications and to be able to play games that do not require many graphic resources. In terms of autonomy, we can already guess that it should come close to the measurements made with equivalent models from other manufacturers. He is therefore subjected to the same torture as the others by adjusting the brightness to 50% of its power, the sound volume to 40% and by streaming “La casa de Papel” on Wifi from Netflix.

In terms of sound precisely, we appreciate the positioning of the speakers, which allows the PC to be used on the knees without damaging the sound. As on any portable PC, the music level rendering is not exceptional. The bass is well reproduced at low volume, but as soon as 80% is over, even the less music-loving among us will rush to plug in their speakers or headphones. However, the sound is entirely sufficient for series and videos. And fans will have a blast without keeping the power outlet connected. They can last more than 14 hours in a binge-watching session. Fourteen hours and thirty minutes are 4:30 more than the best PC submitted to our endurance test this year.

The performance is not good. It is excellent. This Yoga Slim 7 is quite simply an autonomy warrior. Knowing this, it isn’t easy to compare it to other competing models. If those looking for a stand-alone model at this price should not hesitate, those for whom this is not an imperative can turn to other 14-inch models. They can opt for the Asus Vivo Book S14 S433 and its 11th-generation Intel processor for extra power. And if the price of the Yoga exceeds the budget too much, the Honor Magic book 14 represents a good alternative, a little less powerful and autonomous, but at an unbeatable price. Given these results, we regret that Lenovo did not integrate a less brilliant screen and a slightly larger trackpad.

But these are probably technical or budgetary constraints, or logic in the case of the trackpad, to free up space for a keyboard that cannot be faulted for much. On the other hand, a red card for this integration of antivirus software with distressing alerts is to be uninstalled as soon as it is started. The good performances quickly make you forget these minor inconveniences. In addition, the design is booming, and the experience with Windows Hello via authentication by facial recognition is efficient. But we especially remember the competition autonomy offered by this device for this level of power and budget. If it meets your needs, with a price between 800 and 900 euros, go for it.

Also Read: How To Make PC Protection On MacOS