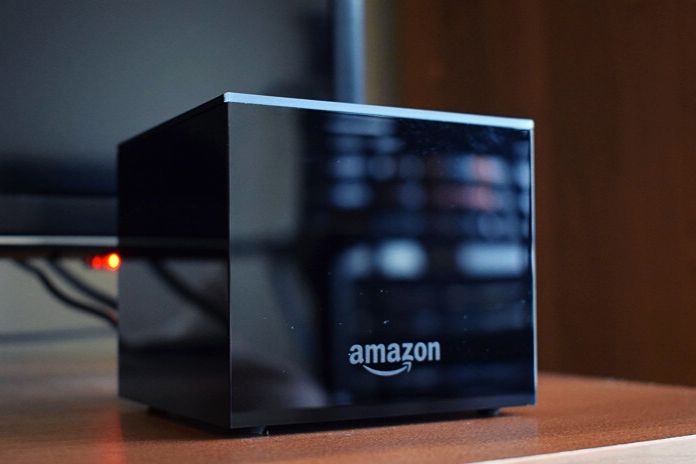 Amazon Fire TV Cube reaches the third generation. Performing and versatile, however, it needs a higher price. Here is our review. Over two years ago, Amazon launched the Fire TV Cube, which we reviewed in this article. After two years, it is updated with new features, but at a somewhat high price for the features offered. The third generation needs a rather too ambitious launch price and some shortcomings that leave us unsatisfied, despite the excellent performance.

The package comes with a power cord, the remote control (including two batteries) with a microphone for communicating with Alexa, and the cub motto, which measures 86 x 86 x 77 mm and weighs 513 grams. The anthracite-colored design can adapt to any environment and furniture and is much better than the past editions in which it was shiny and scratched easily. Built with 30% of the plastic recycled during production, it has a fabric from which the audio content comes out. The volume is high enough, and the quality is good, but undoubtedly not top-notch.

The audio can rely on the soundbar or Amazon devices such as Echo Studio during playback. Otherwise, the audio output will go to the TV or devices connected via infrared or Bluetooth. At the top, we find the four keys on each Amazon device: the one to call up Alexa, the one to mute the microphone, and the two to control the volume. The lower part is equipped with a rubber base to protect the furniture on which it will be placed from any scratches or damage due to the edges of the cubic product. While interacting with Amazon’s voice assistant, the LED lights up white or blue, red instead when you want to mute the microphone.

Finally, in the back are several ports, including an input and an output for the HDMI cable, which we need help finding in the package. This is a reasonably critical lack for a device of this cost. Those who are practical know they will have to buy one separately if they don’t have one, but those who want to approach this new product will find themselves with an incomplete device. In the center, the input for the IR extension cable (as already mentioned, a separate antenna will be needed) and the power port. Finally, the information for the Ethernet port and the USB-A to connect, for example, hard disks or keys, to use the contents stored inside. Compared to the older generations, we lose a micro USB (and we don’t even find a USB Type C), but we gain an HDMI input and a USB-A.

The Technical Characteristics Of The Amazon Fire TV Cube

The technical characteristics of the Fire TV Cube are exciting. Inside there is, in fact, an Octa-Core processor (4x 2.2 GHz and 4x 2.0 GHz) and an 800 MHz GPU. It provides storage of 16GB and 2GB of RAM. They may seem fair values, but the use is snappy and fluid in any service. There is support for Wi-Fi 6E networks, while connectivity is Bluetooth 5.0 + LE. Different formats supported, you get 4K, HDR10 +, Dolby Vision, Dolby Atmos, and playback at 60fps up to 2.160p. At the end of the roundup of some of the numerous technical specifications, let’s talk about the product’s performance.

Like the much better-known Amazon Fire TV Stick, the Cube can turn any TV into a smart TV. The older ones will have compatibility problems, such that they cannot be turned on or off by asking Alexa or the remote control or with voice commands. But if we are talking about new generation TVs, there will be no problems, even for 4K playback. The Android-based operating system allows you to range between the different streaming platforms or play with the various video games which can be combined with joysticks. From the Alexa app, you can also configure audio playback so that it can be played, for example, on Echo Studio, to watch movies and TV series at full audio. But the Fire TV Cube isn’t just entertainment. It will be possible to manage the smart home, consult the images from the security cameras (even in picture-in-picture mode), and so on.

The product is pleasing, also in terms of design and is versatile. But it is also true that it is difficult to ascertain its usefulness at this price. Of course, there is the possibility of transforming a regular TV into a smart TV in the case of managing the smart home and the Amazon ecosystem. Still, it only adds a concrete improvement if you have a 4K TV or limited software. The audio provided by the Fire TV Cube could be better, and playback is enjoyable when combined with a soundbar or, for example, Echo Studio. Otherwise, you will have to settle for the audio of the TV. The lack of an HDMI cable in the package is felt, especially at 159.99 euros. At this price, however, a Fire TV Stick 4K is much more attractive, which costs a reasonable 100 euros less and does not require an HDMI cable.