The Future Of Smartphone Design, Flexible And Rollable Screens 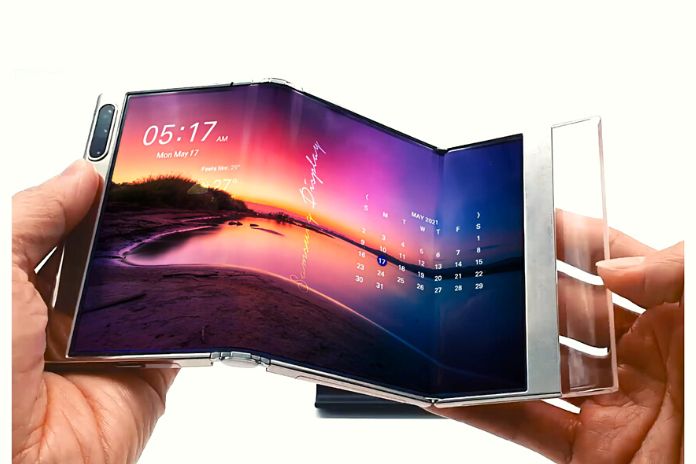 Between new prototypes presented and supply agreements in Asia, this year we could see many new folding smartphones and the first rollable smartphones: they won’t be perfect yet, but something is moving. In the last 15 years, we have seen smartphones with increasingly large, bright, defined screens and increasingly bright colors. But always the same shape: rectangular, more or less ” wide. ” Only for a couple of years, however, have we begun to see new form factors, such as foldable smartphones. The so-called ” foldable “devices with a large screen divided in half by a hinge allow you to close the smartphone ” booklet. “

The first commercial device of this type for the global market, the Samsung Galaxy Fold, was presented in February 2019 and was on sale in early May. However, the device’s great innovation showed significant problems in the hinge area from the beginning. For this, Samsung was forced to change the design of its first foldable mobile, reinforce it, and announce a new version just two and a half months later. The Samsung Galaxy Fold, however, was taken off the market as early as August 2020 as it was far from being a usable device daily.

In these two years, smartphone manufacturers have worked on this technology, presenting other models such as the Samsung Galaxy Z Fold 2, the Galaxy Z Flip, the Motorola Razr 5G 2020, the Huawei Mate X, and Xs. However, the Microsoft Surface Duo does not fall into this category of products: this device is made with two sides, not with a single screen that folds. The flaws of the youth of folding screens have been partially resolved, but not wholly, and the big electronics companies are already working on another innovative technology for screens: ” rollable ” displays. At CES 2021, both LG and TCL showed two examples of these devices, but they have not yet arrived on the market.

Both LG and TCL prototypes are made with OLED technology, the only one that currently allows you to bend a screen without breaking it. Compared to devices with hinges already seen, those that roll up have an advantage: the user can choose the screen size. By unrolling more, or less, the display obtains a greater or lesser viewing space. If the screen is partially open, it is only partially turned on. At a minimum, the smartphone looks like a regular mobile phone and can be used like a standard mobile phone. In both cases, it is not yet a ready-to-market product, but both manufacturers say they will be able to sell a smartphone that rolls up by the end of 2021.

What Are Foldable And Rollable Smartphones For?

The smartphone with a classic screen has the undoubted advantage of robustness: it resists falls, is primarily sealed and does not let water and dust get inside. In addition, today, it is possible to build smartphones with traditional screens at meager prices. But, like all stationary things, such a smartphone has the disadvantage of being inflexible. On the other hand, future folding or rollable smartphones will still be more fragile and expensive than normal ones for a long time, but in the medium term, they could become routine. This is because the possibility of changing shape corresponds to the possibility of changing the way we use them: with a flexible smartphone, you can do more things as long as the interface and the operating system can enhance their potential.

The most logical example, but also the banalest, is the smartphone that turns into a tablet when it is entirely open. Microsoft Surface Duo, while not ” foldable,” has shown us that it is possible and convenient to use the second screen as a virtual keyboard for longer typing sessions. A screen that folds in half can also be used to show two people facing each other the same content or, why not, to have them play the same game simultaneously. The new possibilities are almost endless, and it will be up to smartphone manufacturers to decline the idea of ​​the flexible screen in the most effective way. If they can do so, this technology could revolutionize the industry.

Today one of the most significant limitations of ” foldable ” smartphones is the price: all the models mentioned cost well over a thousand euros. The cost of these devices will only come down with mass production, which may come sooner than expected. According to rumors recently published by the Asian press, Samsung has already signed supply agreements with unspecified Chinese smartphone manufacturers for 1 million foldable displays. A supply for 2021 only.

This means that, within this year, the invasion of folding devices at more reasonable prices could arrive, also because to this million screens must be added those produced by Samsung for its own devices and those built by two other companies: the Chinese COST and BOE. If the rumors turn out to be correct, then, already at the end of 2021, between 1.5 million and 2 million folding smartphones could be placed on the market, and if TCL and LG keep their promises, the first rollable could also be seen. In this market, something is moving, in the true sense of the word.